about tin mining in bangka and belitung

Both the cultural and natural environment is used for tin mining in Bangka Island and Belitung Island, Indonesia.

Location of the Bangka and Belitung province in Indonesia. The two largest islands, in order, are Bangka, then Belitung.
How the natural environment is used for mining

Bangka Island and Belitung Island, Indonesia, produce 26% of the world’s tin, and have been a source of tin since the year 1668. Tin in Indonesia is found in alluvium, a loose soil that contains clay, gravel, and silt, along with ores of different elements depending on the location. The main way that alluvium is extracted from these islands is by using powerful water jets to break it up, and it is then pumped through hoses to places, usually boats, where the tin ore is separated from the silt and gravel. The breaking up of alluvium is only required in dry places on the islands where the alluvium is not already in a sludge-type form; otherwise it can also be mined offshore where the bottoms of the shallow waters are already at a slurry consistency.

How the cultural environment is used

The Bangka and Belitung Islands are home to more than just tin mines, with people living there and various industries also operating on the islands. In 2011, the combined population of the Bangka-Belitung islands was around 1.26 million people. Apart from the estimate of 15,000 to 50,000 people independently working in the tin mining industry, most of the other people living in Bangka or Belitung are farmers or fishermen, with pepper being a popular fruit grown for exports and fish being a common part of locals’ diets. Rubber from rubber trees is also produced in Bangka, while palm oil plantations are found in 40% of Belitung’s land. Tourism is also big in both islands, which are known for their generally clear waters and white-sanded beaches. However, the infrastructure in the islands is generally poor, with limited electricity and roads available. Most roads and power lines that have been built on the Bangka Belitung islands are by large companies who gain benefit from the industries there. The ports on the shores that allow ships to bring in and take out goods are not practical as the water is too shallow for the ships to move freely. There is an airport on both islands that are used domestically.
Tin mining in Bangka Island and Belitung Island is conducted either by miners who work for the company PT Timah or by people who work independently or in groups as smaller operations.  Most of the ore is processed and smelted locally, and between the two islands they produce an annual export of 100,000 tons of tin. 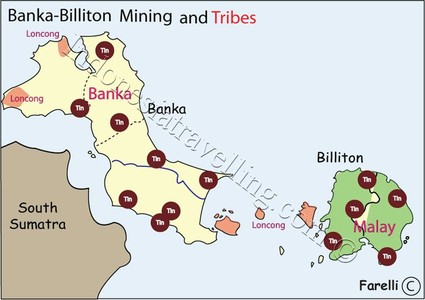 The main locations of tin mines on Bangka Island and Belitung Island, Indonesia
Why this place is used for mining

In the natural environment, tin is not found in its pure form, but as part of ore. There are different types of ore that contain tin but the one that is mined the most is called cassiterite. Indonesia contains 90,000 tons of tin deposits in its land. Deposits of cassiterite are all around the world, naturally found in the earth’s crust, but a place where they are quite concentrated is in the southern parts of Asia, where Bangka Island and Belitung Island in Indonesia are. As the electronics industry has taken over the world in recent decades, the demand for tin as use in solder has become greater, and therefore tin mining has increased massively. There is no shortage of people working in Indonesian tin mines – miners make up about 20% of the people who live on Bangka island and Belitung island, and another 40% work in jobs that are closely related, such as smelting. Many people leave their existing jobs in other locations in Indonesia to become tin miners. In order to mine for tin in Indonesia the government requires a permit to be obtained from them, and therefore the health and safety rules that they set must be followed. PT Timah is the largest legal miner of tin in Bangka and Belitung but there are huge numbers of illegal workers who not only mine without permits but also exploit children as employees, take ore from legitimate mines and work without consideration to safety.